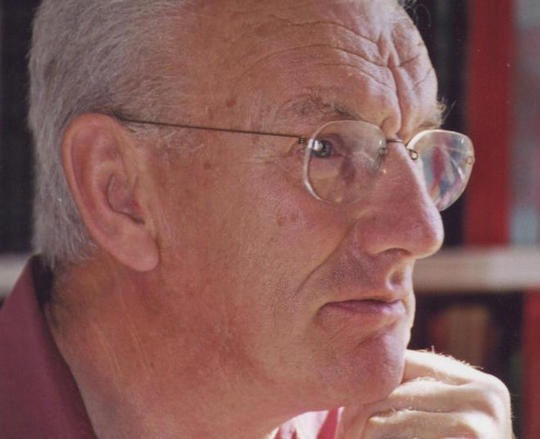 Don Cupitt has been described as "the most radical theologian in the world": a philosopher and Anglican priest, he has been at the forefront of non-realist theology for decades. His 1984 book and tv series, Sea of Faith, gave birth to a movement that is still thriving. In them he surveyed western thinking about religion and charted a transition from traditional realist religion to the view that religion is simply a human creation.

Born in the Lancashire town of Oldham in 1934, Cupitt travelled south as a boy to be privately educated at Charterhouse in Surrey. From there, he went on to study natural sciences, theology and philosophy of religion at Trinity Hall, Cambridge. On graduating, he gained a place at the Anglican Theological College in Cambridge, Westcott House.

In 1959, now in his mid-twenties, Don decided to return to his native Lancashire. There, he was ordained to the Diocese of Manchester, and the following year became an Anglican priest.

After a short period as a curate in the North, Cupitt returned to Westcott House in Cambridge as Vice Principal. In 1965 he was elected to a Fellowship and appointed Dean at Emmanuel College, Cambridge. He has remained at the college to this day. In 1968 he took up a professorship at the university in philosophy of religion, a position which he held until his retirement in 1996. On retiring, Emmanuel College awarded him a Life Fellowship.

From the early 1990s onward Cupitt ceased to officiate at public worship, and in 2008 withdrew his status as a communicant member of the church. These developments have been driven by Cupitt’s increasing commitment to a non-realist religious philosophy, wherein he admits to following certain spiritual practices and living by ethical standards traditionally associated with Christianity, but doesn’t believe in the existence of underlying metaphysical entities such as God or Christ. He calls this way of being a non-realist Christian "solar living". He is currently a key figure in the Sea of Faith Network, a group of spiritual ‘explorers’ based in the UK, New Zealand and Australia who share his philosophy. Having published over 40 books, he is a respected writer and broadcaster.

Here is a list of his works to date:

Crisis of Moral Authority: The Dethronement of Christianity, Lutterworth Press, 1972

The Debate About Christ. SCM Press, 1979

After All: Religion Without Alienation, SCM Press, 1994

After God: The Future of Religion, Basic Books, 1997

The New Religion of Life in Everyday Speech, SCM Press, 1999

Is Nothing Sacred? The Non-Realist Philosophy of Religion, Fordham Uni Press 2003

The Way To Happiness: A Theory Of Religion, Polebridge Press, 2005

Above Us Only Sky, Polebridge Press, 2008

to access the latest news, debates and courses featuring Don Cupitt and hundreds of other experts.