Can We Reinvent Ourselves? An Existentialist View

Sartre and Beauvoir disagreed on the tension between our freedom, and our power

| Senior Lecturer in Philosophy at the University of Hertfordshire and author of forthcoming Becoming Beauvoir: A Life
1,131 words
Read time: approx. 6 mins

In Jean-Paul Sartre’s well-known lecture ‘Existentialism is a Humanism’ he wrote that no one’s place in the world is foreordained and that you are what you make of yourself. So at first glance it might seem that the existentialist answer to the question ‘can we reinvent ourselves?’ is yes—in fact, we can never stop reinventing ourselves.

But ‘reinventing ourselves’ implies that we have selves to reinvent, and that we have the power to reinvent them—and not all existentialists agreed about the truth of these claims.

"For Sartre your identity is perpetually in question."

As you read this article you are aware of the words you see and follow the sequence of them in order to understand what they convey. You may be aware of other things, like the sounds around you or the temperature of the air. But Sartre would say that no ‘I’ inhabits your consciousness until you reflect on your activity and see it as yours—for example by telling someone that you read an article about existentialism today, or that you were distracted by the noise or the heat.

This distinction is important, for Sartre, because the ‘self’ comes into existence with the step to reflection. Whereas Aristotle defined identity as ‘the fact that a thing is itself’, for Sartre your ‘self’ (as an object you can consider with questions like ‘who am I?’) presupposes your consciousness and your identity is perpetually in question. ‘Existence precedes essence’ because we continuously invent ourselves through action.

When asked ‘why do you do what you do?’ many people appeal to motives or reasons or causes as the explanatory antecedents of their actions. Some explanations are situational, and some are personal: for example, ‘she went for a run because she’s training for a race’ or ‘he kept my secret because he is trustworthy’. Human action is often interpreted as a response to circumstantial demands or an expression of personal identity. But Sartre finds both of these ways of thinking dissatisfying and backwards. On his view, it is by acting that we establish an identity and let external demands to shape our action. We call someone trustworthy because they have kept our secrets. And going for a run implies a prior choice to assign value to training for a race. 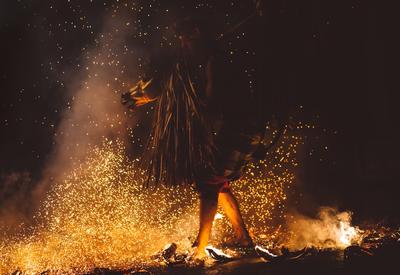 SUGGESTED READING Can We Reinvent Ourselves? A Buddhist View By Bronwyn Finnigan Sartre believed that we are radically free to choose the kinds of selves we want to become. At any point the runner can stop training; at any point the confidante can betray his friend’s trust. And when we recognise that our freedom means we can negate the value we have previously assigned things — that we can decide to see running or trustworthiness as worthless — one response to seeing the precarity of our values is to flee our freedom.

It was this insight that led Sartre and Simone de Beauvoir to develop the concept of 'bad faith' in the 1930s. Although Sartre is widely credited with the concept, their relationship at this stage was one of constant conversation, and Beauvoir’s memoirs suggest that ‘bad faith’ was their joint progeny. According to Being and Nothingness bad faith occurs when a person overidentifies with one side of a duality — facticity and transcendence. Facticity stands for all of the contingent and unchosen factors of your existence, such as the time, place, class or family into which you were born, and the size, shape, colour or ability of your body. Sartre also included the past in this category, although Beauvoir and Sartre disagreed about how much weight to assign to it. On the opposite pole, transcendence means ‘surpassing’ these given features of your existence to choose the self you want to become.

Overidentifying with facticity is bad faith because it is a failure to recognise freedom. In this kind of bad faith, people take their lives to be completely determined by their facticity instead of acknowledging that they are still free to shape their futures. By contrast, the problem with overidentifying with transcendence is that it fails to recognise the ways in which the ‘givens’ or our existence limit the possibilities of our futures. It is bad faith to think that you are determined by your past or your body, but it is also bad faith to think that you are completely free from them.

"Beauvoir objected that Sartre failed to take into account the ways in which people’s situations can drastically limit their ability to reinvent themselves."

Beauvoir and Sartre disagreed about the concept of freedom for decades, although eventually Sartre came closer to Beauvoir’s view. Beauvoir objected that Sartre failed to take into account the ways in which people’s situations can drastically limit their ability to reinvent themselves. Her challenge was: ‘what kind of freedom can a woman in a harem achieve’?

Beauvoir thought another distinction was needed—between freedom and power (liberté and puissance). All human beings are free in the first sense: at the level of our consciousness we are free to value different things at different times in life, and to choose projects to pursue in action. But at the level of action we do not have equal power. Some people’s possibilities are circumscribed by circumstance in ways that others’ are not.

Although Beauvoir was a very powerful woman in some respects, in others she is a paradigm case of circumscribed possibilities. Despite her independence of thought and importance for the development of existentialism, for decades she has been dismissed as Sartre’s derivative double. Even her landmark feminist work, The Second Sex, has been described in these terms. Much of Beauvoir’s philosophical work was untranslated into English until after the turn of the 20th century, giving a partial picture of the development of existentialism. (For more on this, read Jonathan Webber’s Rethinking Existentialism.)

One of Beauvoir’s key insights is that there is no such thing as reinventing oneself without reinventing the world for others. On her view, human beings become who they are with other people, and some ‘reinventions’ have unwanted effects for for the people around them. Her feminist philosophy called for a reinvention of the world so that more people would have the power — not just the abstract freedom — to reinvent themselves.

For Beauvoir, therefore, the answer to the question ‘Can we reinvent ourselves?' has two answers: in the sense of being free, abstractly—yes. As for having the power, however — that depends on your situation.