Contemporary metaphysicians ask deep questions about the structure of reality but answer them with unreliable, untested intuitions. Although philosophers like Alexander Kaiserman argue that logical argument can tell us which intuitions are valid, to be useful to anyone, metaphysics must apply comprehensive models of the world and start asking questions that really matter writes Craig Callender.

To understand my concerns about the direction of analytic metaphysics, let’s begin with a little game. I’ll describe a simple scenario. You guess what will happen. 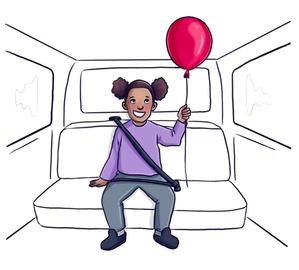 1. You’re in a car stopped at a red light. You hold a helium balloon. The light turns green and the car starts to accelerate forward. Release the balloon. In what direction does it go, if any?

2. Pierce a small hole in both the cap and bottom of an ordinary plastic water bottle filled with water. Drop the bottle. Water ceases to flow out while it falls. Refill and throw the bottle up in the air. What will happen?

3.Take two potatoes and attach them with an elastic. Hold them horizontally level under a bit of tension and drop them. The two potatoes hit the ground at the same time. Try again with the potatoes oriented almost vertically, still attached by the elastic. Release. Which potato hits the ground first, if any?

The answers are at the end of this article. Take a peek and see how you did.

Good physical intuitions are ones that are in harmony with good theory. My point is that some areas of metaphysics lack this.

Suppose that we had to build our theory of the universe on these and other hunches. Furthermore, imagine that we are not allowed to do the above experiments nor appeal to good theory predicting and explaining what would happen. Too much of analytic metaphysics looks like what would result — elaborate towering systems based on flimsy foundations. Here I have in mind what Amanda Bryant calls “free range metaphysics”, metaphysics that floats essentially freely from science. As she says, what is good for chickens is not good for metaphysics.

My point is not against the use of intuition. In physics education there is a debate about its use. One side uses cases like the above to show that intuition can be trouble because it often misleads. Another school of thought that I favor (featured in Physics Education’s wonderful What Happens Next? series) uses examples like these to help students develop better physical intuitions.

What makes intuitions better or worse? Answer: good theory. Good physical intuitions are ones that are in harmony with good theory. My point is that some areas of metaphysics lack this.

They lack good theory and are stuck with a bunch of unmoored intuitions. We’ve just seen how counter-intuitive the world can be, even with familiar objects such as balloons, bottles and potatoes. If these intuitions are oﬀ-base even with good theory in the background, how can we expect them to be reliable in exotic metaphysical scenarios absent good theory? Our intuitions are historically conditioned and often misleading. To weed out the good from the bad we must appeal to comprehensive theory that seriously attempts to model the actual world.

One problem with this reply is that every word in “inference to the best explanation” except  “to” and “the” are unclear. Put that concern to one side. If we zoom out enough, at some level we must agree. We will only ever have a finite number of data points. Think of theorizing as drawing a line through all those data points. With a finite amount of data, we can always draw an infinity of lines through it. If anything going beyond the data counts as “inference to the best explanation” then metaphysics is in the same business as science.

Tara Shears, Hilary Lawson, and Alison Milbank question ‘what is the nature of reality?’

But someone would only say this if they didn’t understand how science works. How did theory in science get to be good? As Bas van Fraassen says, a “scientific theory is born into a life of fierce competition, a jungle red in tooth and claw.” In the case of physics, it is often based on centuries of observational data, crucial experiments, independent checks, independent teams of statisticians, unification with other branches of physics, and rigorous theoretical virtues.

A metaphysician will perk up at the mention of theoretical virtues. Isn’t simplicity a virtue? Metaphysics uses that, just like science. This is a bad pun unless we zoom way out again. Consider the example of curve-fitting. Yes, this uses simplicity, in the sense of sophisticated regression analysis and other concepts like Akaike information criteria designed to weed out error. Nothing like this exists in metaphysics, where simplicity often involves counting fingers on one hand.

That’s my first worry about analytic metaphysics — left unconstrained by science, it degenerates into trading back and forth empty intuitions. My second (related) worry is that often the debates lack value in helping us understand the world.

One recent debate in many of the best journals is about whether the world is composed of things or stuﬀ or both. Last I checked, things and stuﬀ are not natural kinds in any mature powerful theory of the world. Maybe our distant ancestors sitting around the fire in a cave found it useful to carve the world up into things and stuﬀ:

Krokk: Inside the rock? Zug: Stuﬀ

Krokk: [slams rock violently onto ground, breaking it into pieces] 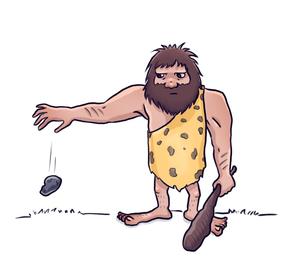 I am not against all metaphysics. But we should resist sliding down the slippery slope that goes from some metaphysics being good to all of it having promise.

Compare the thing and stuﬀ debate with that between particles and fields. The latter is a metaphysical debate, for it seems like data will never directly decide between the two. What we take to be particles could always be clumped bits of field, and vice versa. Yet whether there are particles or fields turns out to matter to scores of issues (e.g., energy, relativity, determinism, locality) and indirectly to a ton of theory and data. It is also crucial to developing better interpretations of quantum theory and future progress in quantum gravity. It’s hard work.

Meanwhile, in the stuﬀ versus things debate, they are busy debating whether it’s natural to dub as stuﬀ the product of putting all the things in the universe into a giant pasta maker and then turning the handle until every thing is stretched. Imagine if the public — or worse, upper administration — found out they were paying people to debate this. My first point was that if we got the potato question wrong, how can we have confidence in our answer to the giant pasta maker question. It’s utterly unconstrained by rigorous theory. My second point is that it’s hardly clear that answering the giant pasta maker question matters to understanding the world.

If a field ontology is correct, it matters to our understanding of energy, prediction, and locality. The hope is always that this will lead to better new theory and experiment. Suppose a stuﬀ ontology, by contrast, is correct. Stuﬃsts win. It’s all stuﬀ. Fine. So what? What do we learn about the world?

Defenders of free range metaphysics will answer that the debate matters to many other metaphysical debates, such as whether a single bunny rabbit lasting across time is one rabbit or an infinity of rabbit time stages, whether a new object is brought into being when a fist is made, and other such matters. I agree that we may find an interesting map of some parts of our cognitive architecture (assuming that intuitions about things and stuﬀ track something outside of English). Yet why think we’re learning about the world? Each of these debates have independently been criticized as free range metaphysics. It’s an empty house of cards.

Obviously I am not against all metaphysics. My more nuanced views are here. But we should resist sliding down the slippery slope that goes from some metaphysics being good to all of it having promise.

The balloon will go forward to the front of the car, no water will come out of the bottle (going up is free fall too), and the higher potato will land first (subject to a few qualifications). The potato is an instance of the fantastic Slinky effect, where the bottom of a released Slinky stays suspended mid-air until the falling top hits it. In the water bottle link, the authors report that more than 80% of their students got the wrong answer.

I should express that I like this article so a ton and moreover using it in regular. I believe you would continue sharing better than average articles here.
play solitaire

Thanks a lot google

I read your post. It is very informative and helpful to me. I admire the message valuable information you provided in your article. Thank you for posting, again! subway surfers

I read your post. It is very informative and helpful to me. I admire the message valuable information you provided in your article. Thank you for posting, again! <a href="https://subwaysurf.co/">subway surfers</a>

thanks for your post, that's helpful
iai.tv members can play <a href="https://geometry-dash.co/geometry-dash-unblocked/">geometry dash unblocked</a> free online

Interesting to read, I want to read the whole article. Thanks! your efforts mean so much. https://stickmanhook.io

I share with everybody https://cookie-clicker2.com free and so funny

Are confused after reading a college freshman survival guide? No need to worry, as everything is not that bad. Simple tips and recommendations will help you succeed. https://collegehomeworktips.com/college-freshman-survival-guide-2020/

Almost everybody familiar of metaphysics and its one of best branch of science. Metaphysics is basically a branch of https://www.superiorpapers.com/programming.php science in which we study on the fundamental nature of reality and also used for mind relaxing therapy.

The metaphysics I learnt on my masters course was completely disconnected from anything else I studied. The arguments seemed medieval and it only became clear why there were important when I realised that they were all proofs of the existence of god that had been created for court lectures. This can't be a good way to introduce students to this subject.