Amid the refugee crisis, social media has been hailed as the power of the people. But who is really in control?

| Research Director at The Centre for the Analysis of Social Media, part of Demos thinktank
1,039 words
Read time: approx. 5 mins

A single man, alone, against a column of Chinese tanks. The Stars ‘n’ Stripes half-raised above Iwo Jima. Phan Thj Kim Phuc running in fear ahead of American GIs in Vietnam. Sometimes a photo captures a single moment and becomes timeless.

Aylan Kurdi’s limp body, carried from the Greek beach where he was washed up, is the latest in the pantheon of photos that cut through the general fog of distance and apathy with an edge sharper than any statistic. The family’s story is now as familiar as it has remained upsetting. Fleeing Kobane in Syria, and making for Greece, Aylan drowned with his brother Galip and mother Rehan when their boat capsized in the open sea. Their tragedy has become the singular icon of the worst refugee crisis since the Second World War.

British newspapers almost didn’t print it. When they did, according to Getty, they broke a “social taboo that has been in place in the press for decades: a picture of a dead child is one of the golden rules of what you never publish.” Why? Children die and suffer in conflict, and have suffered and died in Syria and Iraq. What made the photo of Aylan different? Why did newspapers break their own golden rule?

Newspapers printed it and channels broadcast it because the picture was already out there. Before any professional journalist or editor had made the call, it was already sweeping through social media. “We got to this point”, continued the spokesman from Getty, “because individuals have had the balls to publish the pictures themselves on social media. I think that gave the mainstream media the courage and the conviction to publish this picture.”

Social media has been steadily creeping into public life for years, but the refugee crisis is a singular breakthrough moment in its role in public life. Angry and horrified, people used their powerful new armory of digital tools to make their voices heard. Over several weeks, from hashflags and hashtags to online groups and petitions, the online conversation kept building. Hundreds of thousands of tweets appeared, criticism and abuse was thrown at Government ministers, people spontaneously set up groups and initiatives to send whatever help they practically could, and close to a million signatures amassed across a flurry of online petitions. And, of course, they started sharing the picture of Aylan.

As they did so, mainstream media reacted. The coverage flipped, from stories of holiday makers’ disruption in Calais, to a full-blown presentation of the human misery and tragedy of the mass migration of hundreds of thousands of people. Eventually the Government took an action they have not done before – they said they’d take 4,000 more refugees. It wasn’t much, but it was something.

This is the strongest example yet of a new principle is creeping into journalism: what is being shared on social media is, by definition, newsworthy. Outlets like Buzzfeed and BBC Trending have been set up explicitly dedicated to this premise, but it is more widely at work throughout our press and broadcasters. With social media use continuing to grow, the trends, surges and virals these platforms create are only going to become more influential in the years ahead, bursting onto the news and into print with ever greater frequency. And as they do this, they will also impact public decision-making, sometimes causing public policy to bend and shift depending on the questions that Ministers are asked and the pressures that they feel.

Partly, of course, this will be a very good thing. The recent Corbyn, SNP and UKIP surges notwithstanding, we live in a time of worrying and general public dismay with our politics and politicians. Social media is now a seething, boiling mass of democratic potential. It is an engine of new petitions and campaigns and, I suspect, new political parties and movements by 2020. Giving more people more opportunities to participate in public and political life can be no bad thing. And for what it’s worth, I think that on the refugee crisis, the people using social media to complain were right, and the Government was wrong. People having recourse to new digital means of activism produced a more humane policy as a result.

But there are dangers lurking here too. A rule of the virals could end up being, in fact, anti-democratic. Firstly, of course, no social media trend is nakedly a proxy for public opinion. Only certain parts of society use social media platforms, and usually a small number of ‘power-users’ dominate even this conversation. I’ve recently releasing research on how to listen to social media in more representative ways, but the 58 pages of that report are easily summarised: it’s really, really difficult.

But secondly, trends and virals can be engineered. A new breed of ‘guerilla’ marketing agency has sprung up (like The Viral Factory) with promised expertise in ‘seeding’ virals on the Internet. It’s a difficult art, but a small number of skillful viral marketers can make a carefully engineered campaign look like an organic and spontaneous outburst of public sentiment. But even more worrying is the influence of states: 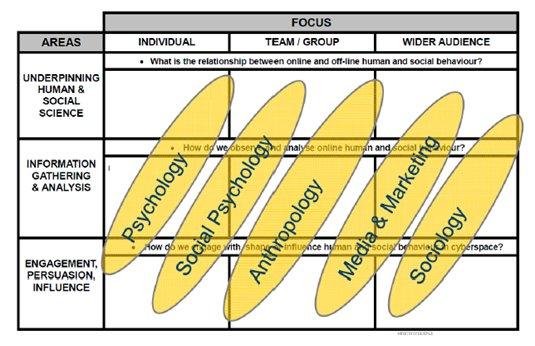 This was taken from a public call for proposals from the Ministry of Defence’s ‘Centre for Defence Enterprise’ back in 2011. Theme 3 was ‘influence through Cyber’, asking for new ideas to “achieve influence ‘in’ & ‘through cyberspace amongst individuals, groups and wider audiences in their information environment”. Calls from other Governments around the world during this time (and since taken down) were more specific: asking for technology to allow a single analyst to control a large number of social media accounts. It is well within the technical capacity of many states to create seemingly believable social media surges, and unscrupulous regimes around the world won’t be openly advertising for help to do so.

Important shifts are underway. But as the rise of social media rearranges the furniture of political and public life, we need to confront some hard questions of its role within it. There are great opportunities here, but virals can be the property of the powerful and capable as much as they are of we the people. There’s a lot still to do for us to be sure that we come out of this revolution a more democratic society as well as a more digital one.