The precautionary principle can save lives

The world has become a lot more dangerous and uncertain. We have not seen a pandemic the likes of COVID-19 for a century. Within three short months over 250,000 people have been confirmed to have the virus, while hundreds of thousands more are infected and undiagnosed. Naturally people are looking to scientists to provide answers for how we can and should respond to this pandemic.

Britain’s Prime Minister Boris Johnson has capitalised on this by seeking to dress his political decisions in the veneer of science. He has consistently referred to his ‘scientific’ and ‘evidence-based’ approach to justify his political decisions. He has enlisted the chief medical and scientific advisers to accompany him in speeches and interviews to reinforce this framing.

Yet, despite this, many people have cogently criticised the UK for lagging behind our European neighbours and for essentially getting the science wrong. And it is true that the behavioural psychologists who have played a role in shaping the government’s strategy are on shaky ground with their claims that people will simply get bored of quarantines and ignore them if they are enacted too early. Just look at the way that many of us have, encouragingly, been only too keen to pursue safety, by going way ahead of the Government – and so keeping ahead of the virus.

When you take risks with other people’s lives by depending on assumptions that you cannot know are true, you act unethically.

The government’s partially retracted ‘herd immunity’ strategy has also rightly come in for the devastating criticism that it makes a series of unverified assumptions about the behaviour of this new virus. We are right to highlight these deficiencies. When you take risks with other people’s lives by depending on assumptions that you cannot know are true, you act unethically. This is what the UK Government has done.

Nevertheless, it is an overly narrow approach only to pick up on specific issues in Boris’s ‘evidence-based’ approach. Rather, I think we need to instead interrogate whether ‘evidence-based’ is really a high enough standard to be applying to a massive global humanitarian disaster in-the-making, even if it were applied as well as possible. Is an evidence-based approach really such a self-evidently good way of dealing with a pandemic?

You might wonder how an evidence-based approach could possibly steer us wrong. After all, we want to be informed by evidence to make the best decisions possible, right? For me, this is undeniable. The problem is when science becomes ‘scientism’. This is the term used to describe the ideology that science can provide us with value-neutral answers in domains such as ethics, politics and economics. If one sees problems through the lens of scientism, then evidence-based judgments come to mean supposedly value-neutral judgments.

Taking this approach fundamentally obscures the value judgments that are at play in political decisions. The truth is that UK Government has constantly made political decisions in the last few weeks – to try to keep the economy ‘moving’ a little bit longer. It has hidden its politics behind the veneer of ‘evidence-based’ science. This obscures the extent to which the way that we respond to the inherent uncertainties in the world involves value judgments. We need to approach problems like global pandemics by being as informed by evidence as possible, but also in the knowledge that evidence itself won’t give us political and ethical answers. We want to be informed by science, but not blindsided by scientism.

Boris Johnson’s delay in enacting physical social distancing measures etc was sold to the public as being what the science demanded. Indeed, he criticised other countries for ‘overreacting’. But the reality is that there is a tremendous amount of uncertainty in how this unprecedented virus will develop. We need epistemic humility and an awareness that the available evidence could lead to a huge range of possible outcomes. What looks like ‘over-reaction’ is in fact playing safe. It is being precautious. It is what other countries have done much more than us: and we are now reaping the deaths that result from our Government’s arrogance, recklessness and complacency – all pursued in the name of ‘science’.

Unlike, say, the number of car accidents in a year, the number of deaths from a global pandemic cannot be modeled to any degree of precision. After all, we haven’t experienced a pandemic of this severity for one hundred years – and the world was a completely different place then, much less hyper-mobile, and so much less prone to being over-run by a new disease. How on earth can we be expected to accurately model the trajectory of Covid-19, given this cocktail of newness. In the face of this profound uncertainty, an approach based on predictive modelling is on shaky ground. We need to look to other values and other principles to guide us in public policy.

For unprecedented events like this, modelling simply won’t cut it. There is just too much at stake.

We should consider what the Precautionary Principle has to teach us about pandemics. This is the decision-making rule that in the absence of near certainty of safety, we ought to take aggressive action to minimise catastrophic threats. This rule is only decisive when the potential costs are ruinous and the predictive validity of models is contains dubieties. For unprecedented events like this, modelling simply won’t cut it. There is just too much at stake.

Rather than trying to model ‘precisely’ when to intervene with aggressive regulatory action, then, we are far better off instead considering what is at stake by acting too strongly versus what is at stake by acting too weakly. The answer, when we think about it with any seriousness, is that too strong action will more quickly reduce wealth and economic activity; whereas too weak action could cost hundreds of thousands of lives (at minimum); across the world, many millions (as well as have uncertain massive economic knock-on effects down the line).

It is here then that the value judgments behind political decisions about pandemics come into full light. Are we willing to risk this week’s economic potency, or are we willing to risk our neighbours, friends, and elders’ lives? I put it to you that, for most of us at least, there is a very clear answer to that question.

And our Government has fluffed this exam. Some of our parents and grandparents and medically-vulnerable (including reader, your humble author) will pay for it (and in some cases already are) with their lives.

When all this is over, we must demand a public inquiry into how those lives were so recklessly and casually squandered.

The basic point is that we need to consider the viability of measures through the lens of precaution, and always err on the side of minimising the risk and scale of catastrophic harm.

Its all very well speaking of the Precautionary Principle in the abstract, but what does that mean on a political level? Well, for a start it means taking far more aggressive regulatory action far faster than we have done – and pressing forward with strong measures of quarantine, lockdowns, etc. . An immediate halt to domestic air travel, and a huge scaling back of international flights (with those remaining mainly for helping stranded people to return to their home countries). The reduction of public transport throughout the country would also go some way towards lowering contagion: as an environmentalist, it pains me to say that, but these are new times. The basic point is that we need to consider the viability of measures through the lens of precaution, and always err on the side of minimising the risk and scale of catastrophic harm. We should be willing to make huge economic sacrifices. So that many of our fellow citizens don’t have their very lives sacrificed on the altar of ‘evidence’ and ‘economic growth’.

We should underscore that the virility of this pandemic is only made possible through the huge interconnectivity the modern world has brought us. A sensible approach is therefore to localise our communities by reducing the need for travel. A political and economically localising approach would slow the pace of COVID-19 and serve as an inoculation of sorts against the worst of future pandemics. Which will come, especially with the changing for the worse of our climate and our ‘accidental’ creation of new zoonotic diseases through the ongoing anthropogenic disturbance of natural ecosystems.

The individual choices that we are all facing over the coming months should also be shaped by precaution. We need to be aware that passing this virus to others can create huge contagion cascades that infect thousands of people. It is only by taking pronounced physical distancing steps as early on as possible can we ensure that we are not fueling the wildfire of this pandemic. For many, this may mean a lonely few months, but that is by far a worthwhile price to pay to reduce the scale of this catastrophe. And for many of us there will be compensations: such as the chance to spend more time relaxing, and in nature. (Physically distanced doesn’t have to mean indoors.)

So: Back to where we started. Is it really true to say “The world has become a lot more dangerous and uncertain”, as I did at the opening of this piece? Not really. The more truthful way to put it is this: the world is always dangerous and uncertain. We have just lulled ourselves into a foolish sense of security for too long by ignoring the silent risks that we have allowed to build, through the reckless way we run our societies: through being unprecautious, through untrammelled globalisation, through rampant pollution, and so forth.

What we need to do is learn how to live well, boldly, lovingly, in a world that we will never ‘fully’ understand, let alone control.

That’s why we need the Precautionary Principle. Now more than ever. 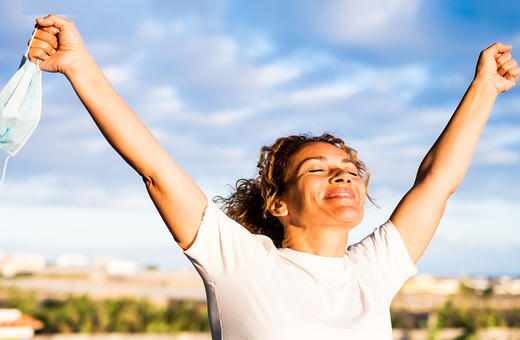 The truth about lies