There is no right way to hang a painting

Abstract art is often made a mockery of. The apparent discovery that a painting by Piet Mondrian has been displayed upside for 75 years has provided vindication to those that mock. But the idea that there is a right way round is as out-dated as the idea, on a spherical planet, that there is any true ‘up’ or ‘down’, writes Julian Spalding.

The discovery that a painting by one of the most famous founding fathers of abstract art has been hanging upside down for 75 years is music to the ears of all those who think that abstract art is a load of baloney. The fact that experts in museums - the very people who are supposed to know most about art - have got it wrong for all this time proves that the whole movement is a sham.  Joe and Joan Public can cheer.  They’ve been right all along.  The emperor has been shown to have no clothes, exposed by one of his closest courtiers. And the best that is left to be said about abstract art is that it’s a (very pricey) con.

I beg to differ. This particular case is beset with internal problems and raises interesting issues about what is art today. But, sadly, I don’t expect any readers who have had all their prejudices confirmed by this laughable mistake, to interrupt their trip down to the pub to listen to an alternative view, or even to look at the work of art in question. Why should they? It’s been proved to be nonsense anyway. 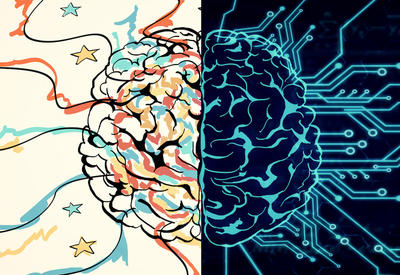 SUGGESTED READING The artist is dead, AI killed them By HenryShevlin

Piet Mondrian’s painting New York City 1 might not have been hanging upside down. It was painted at the very end of his life, and wasn’t signed, which suggests that it might well not have been finished. The art historian, Suzanne Meyer-Buser, who now thinks it’s been hung the wrong way up argues that the closer set of lines at the bottom should represent the sky. However, it's perfectly possible to think that they represent (if they represent anything literally at all) the sea. New York is full of sky-scrapers, but these are often reflected in water. The painting, which is purely abstract, is about the interaction of horizontals and verticals, and buildings, skies and seas are about that. The painting is about basic feelings, not appearances.

Those people who think that there is only one right way up, or even one way of looking at things, are living on a flat earth past. They haven’t even got round to appreciate that we are all living on a sphere, which makes nonsense of ‘up’ and ‘down’ and all the hierarchies that go with these perceptions

Those people who think that there is only one right way up, or even one way of looking at things, are living on a flat earth past. They haven’t even got round to appreciate that we are all living on a sphere, which makes nonsense of ‘up’ and ‘down’ and all the hierarchies that go with these perceptions. And those who think that art has to be (strictly) representational are equally blinkered. That’s as silly as saying that all the sounds in music should imitate those in nature. Such people still bask in the belief that God created the world as it appears and the faithful representation of appearances is a divine endeavour. They still have not grasped the reality that Darwin revealed, that the appearance of every living thing has changed over time. Penises and vaginas could well have evolved on our faces not next to our arses, a truth that Picasso was the first to tackle. As Nietzsche said, ‘we have art so we will not be detained by reality’. 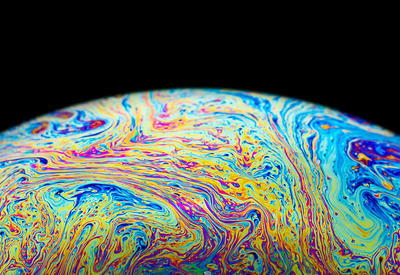 SUGGESTED READING The crisis of creativity By PeterCarruthers

It’s quite possible that Mondrian left the painting unsigned because he hadn’t decided which was the best way up to look at it. It is well known that artists, even representational ones, turn paintings round to see how they are working as a whole. Georg Baselitz turned this into a selling line by hanging his figures upside down. But it’s true, when you turn things over (even just in your mind) you can get a fresh view. Francis Davison was one of the most brilliant artists in recent years working in the demanding area of abstraction. On the back of many of his collages are pencilled arrows pointing in different directions, some scrubbed out, but with the final one underlined, showing how the artist finally wanted the work to be seen.

It is well known that artists, even representational ones, turn paintings round to see how they are working as a whole

Artists, today, in our threatened and fragmented world, have to work all round, to create images of connectedness, if they want their art to speak to the whole mind.