Intervention must be used sparingly

| Economist, historian and rhetorician. Former Distinguished Professor at the University of Illinois at Chicago. Books include The Rhetoric of Economics and Bourgeois Dignity
1,479 words
Read time: approx. 7 mins

There are points at which is is right for the state to intervene in the behaviour of its citizens. Amid the Covid-19 pandemic, that point was at the very start of the outbreak, when government intervention could've made a real difference. As the crisis develops, and in its aftermath, we must be alert to attempts to use this crisis as an reason to expand state influence. 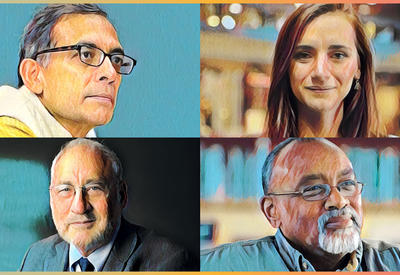 SUGGESTED READING Groundbreaking economics at HowTheLightGetsIn By Plagues, wars, and other tumults of course have always been with us.  Until the late 20th century, war and its equivalents did not lead to permanently bigger and more illiberal government.  Not much.  The U.K. after 1815 reduced state power, initiating the great age of true liberalism.  Yet after a similar putting down of weapons in 1945, state power increased.  In the U.S. during the War to End All Wars, President Wilson took up tyrannical powers with gusto, by for example using state propaganda to whip up anti-Hun feeling, and to suppress news of the “Spanish” Influenza.

After 1918 the U.S. reverted to liberalism. Yet it didn’t do so after 1945. When hot war led to cold, the US War Department was renamed the Department of Defence, and the state’s grip on the American economy tightened.  The Food and Drug Administration, one of several agencies (with British parables) whose malfeasance is responsible for the present lack of testing in the U.S., was from 1962 given veto power over fully one fifth of the economy.  Food.  Drugs.  Coronavirus tests.

Even in countries without many wars to speak of, the 19th-century scribblings of economists and political philosophers have enlarged the scope of the state.

The evidence suggests, in other words, that behind the growth of government there’s something deeper, and more recent, than mere wars.  The missing cause is ideas, in particular a triad of anti-liberal ideas devised in Europe during the 19th century and implemented whole-hog during the 20th century; nationalism, unrestricted majority rule, and socialism. As Keynes famously said during another equivalent of war, in 1936,  “The ideas of economists and political philosophers, both when they are right and when they are wrong, are more powerful than is commonly understood. Indeed the world is ruled by little else”.  Yes.  In a word, they are aspects theorized statism.

In 1918, around the beginning of modern statism, the American journalist and satirist H. L. Mencken noted that “the whole aim of practical politics is to keep the populace alarmed (and hence clamorous to be led to safety) by an endless series of hobgoblins, most of them imaginary.” Mussolini, whom Churchill in the 1930s admired, put it this way:  "Everything within the state, nothing outside the state, nothing against the state". For about a century the emergencies, phony ones such as private monopoly and real ones such as in the current war on Covid-19, have been justifications for more state coercion. Orbán of Hungary is using Covid-19 in the way a few years ago he used Syrian immigration and anti-Semitism.  The cause is not war but ideas, in Orbán’s case the mix of nationalism with socialism we call national socialism. Even in countries without many wars to speak of, such as Latin America or Africa, the 19th-century scribblings of economists and political philosophers, right and wrong, have enlarged the scope of the state.

The second idea, of unlimited majority rule, has been exercised in an expanded franchise in the U.K., from the Reform Bill of 1832 through votes for women, and in the U.S. from the Age of Jackson through votes for blacks.  The right to vote accords a human dignity on ordinary people that Mill and Tocqueville, Sylvia Pankhurst and Martin Luther King, and all true liberals of the past two centuries, have admired extravagantly.  But of course majority voting does not always result in wise policies.  Though, come to think of it, neither does elite rule, for which see Vietnam and scores of other expert idiocies. Maybe it’s “policies” that are the problem, eh?

But anyway, about majority decision-making Mencken also had something to say: it “is the theory that the common people know what they want, and deserve to get it . . . good and hard.”  The worst of majority rule in Greece was called ochlocracy, or from a late coinage from Latin and Greek, mobocracy, such as in the Athenian expedition to Syracuse.  In honor of an old, silly movie of the name, it could be called idiocracy.

Majority voting does not always result in wise policies. Neither does elite rule. Maybe it’s “policies” that are the problem, eh?

Recent polling in the U.S. finds a substantial minority actually approving of Donald’s fumbling and deceitful treatment of the plague.  British people are less forgiving of similarly fumbling by Boris, and French people are even harsher on Emmanuel.  Whatever those facts say about comparisons of idiocracy, many Republican voters in the US, as in the luxury resort in Hilton Head a month ago, under the tutelage of Trump and his Fox-News informants, have been holding house parties to spoof the fake news of coronavirus.  They have demanded the opening of the economies of Florida and Texas.  It can be predicted that in a month or so the Hilton Head idiots of a certain age will get what they apparently want, their premature deaths by suffocation, good and hard.  And the national rate will start reflecting more deaths in Florida and Texas.

The third idea of European intellectuals in the 19th century, socialism, like nationalism and unrestrained majority rule, sounds in many ears unreservedly sweet and good.  In its soft and non-Marxist form it re-enacts the family, in which the state as Mum and Dad gives security to the children, in return for strict obedience.  In a famous speech to the Swedish parliament in 1928, Per Albin Hansson spoke of folkhemmet, “the people’s home”. Thus Sweden’s policy of compulsory sterilization down to the 1970s. Mum wants you to obey, dear.

Socialism charmed me as a folk-singing leftie in high school. Jeremy Corbyn and I are the same age, and we had the same opinions about capitalism in 1960.  Since then I’ve learned a little, for example that socialism is the use of the government’s monopoly of physical coercion to force people to do in the economy what they would not otherwise choose to do.  Power tends to corrupt, and absolute power over the economy corrupts absolutely.  Socialism might therefore be called economic coercionism.

Sometimes, of course, what the government coerces us to do is a fine idea, such as coercing parents to inoculate their children against measles.  One measles case infects sixteen others, and is very bad for adults who haven’t had it as children.  Ask the Aztecs and Incas and Mohicans on that score.  The corresponding number for the novel coronavirus is two or three, which is quite bad enough, and without testing it is sneakily undetectable.  For influenza the number is lower, between one and two, which is why in normal seasonal influenzas, for which we have partial vaccines, it doesn’t make a lot of sense to coerce people.  People, especially old people like me, have plenty of incentive to self-protect by getting their shots, which brings down the contagion for people who don’t (about half of the US population: thus idiocracy).  And when the protection from the flu doesn’t work, as for many thousands annually it does not into death, there isn’t actually anything more that either self-protection or a coercive state can do about it.

Let’s not fall back into the arms of an ignoramus Daddy with authoritarian tastes. Let’s not suppose that an occasionally necessary coercion justifies coercionism, forever.

In other words, coercion is not all bad, no more than preventing your two-year old from running in front of a bus.  Sometimes, in a war of survival (measles, the Battle of Britain) even in a liberal polity, we need to reach over and coerce people.

But this time the British and American and Italian and Chinese states, all of them, unlike Korea and Singapore and New Zealand, put down an easy catch to first slip, namely, the correct, coercive response to a plague with a high infection number.  Jump on it early and then test, test, test.  Having dropped the catch, the only alternative is the medieval one, quarantine, blaming it meanwhile on the Jews or the foreigners.

Our riches make the distinctly second-best of mass quarantine less than disastrous.  We will recover, of course, and do not have to sacrifice our liberties forever to do so.  In Nineteen Eighty-Four George Orwell has the Party man O’Brien explain what a future of coercionism means: “If you want a picture of the future, imagine a boot stamping on a human face—forever.”

Let’s not.  Let’s keep a true liberalism supporting innovation and adult dignity.  Let’s not fall back into the arms of an ignoramus Daddy with authoritarian tastes.  Let’s not suppose that an occasionally necessary coercion justifies coercionism, forever.