The uncontrollability of Artificial Intelligence

The hard problem of AI safety

| Computer scientist at the University of Louisville, known for his work on behavioral biometrics, security of cyberworlds, and artificial intelligence safety.
1,574 words
Read time: approx. 8 mins

The creation of Artificial Intelligence (AI) holds great promise, but with it also comes existential risk. How can we know AI will be safe? How can we know it will not destroy us? How can we know that its values will be aligned with ours? Because of this risk an entire field has sprung up surrounding AI Safety and Security. But this is an unsolvable problem, AI can never be fully controlled, writes Roman V. Yampolskiy.

The unprecedented progress in Artificial Intelligence (AI), over the last decade has not been smooth. Multiple AI failures [1, 2] and cases of dual use (when AI is used for purposes beyond its maker’s intentions) [3] have shown that it is not sufficient to create highly capable machines, but that those machines must also be beneficial [4] for humanity. This concern birthed a new sub-field of research, ‘AI Safety and Security’ [5] with hundreds of papers published annually. But all of this research assumes that controlling highly capable intelligent machines is possible, an assumption which has not been established by any rigorous means.

It is standard practice in computer science to show that a problem does not belong to a class of unsolvable problems [6, 7 ]before investing resources into trying to solve it. No mathematical proof - or even a rigorous argument! - has been published to demonstrate that the AI control problem might be solvable, in principle let alone in practice.

No mathematical proof - or even a rigorous argument! - has been published to demonstrate that the AI control problem might be solvable.

The Hard Problem of AI Safety

The AI Control Problem is the definitive challenge and the hard problem of AI Safety and Security. Methods to control superintelligence fall into two camps: Capability Control and Motivational Control [8]. Capability control limits potential harm from an ASI system by restricting its environment [9-12], adding shut-off mechanisms [13, 14], or trip wires [12]. Motivational control designs ASI systems to have no desire to cause harm in the first place. Capability control methods are considered temporary measures at best, certainly not as long-term solutions for ASI control [8].

Motivational control is a more promising route and it would need to be designed into ASI systems. But there are different types of control, which we can see easily in the example of a “smart” self-driving car. If a human issues a direct command - “Please stop the car!”, the controlled AI could respond in four ways:

We can retain human control or cede power to controlling AI but neither option provides both control and safety.

Looking at these options, we realize two things. First, humans are fallible and therefore we are fundamentally unsafe (we crash our cars all the time) and so keeping humans in control will produce unsafe AI actions (such as stopping the car in the middle of busy road). But second, we realize that transferring decision-making power to AI leaves us subjugated to AI’s whims.

That said, unsafe actions can come from fallible human agents or from an out-of-control AI. This means that both humans being in control and humans being out of control presents safety problems. This means that there is no desirable solution to the control problem. We can retain human control or cede power to controlling AI but neither option provides both control and safety.

The Uncontrollability of AI

It has been argued that the consequences of uncontrolled AI would be so severe that even a very small risk justifies AI safety research. In reality, the chances of creating misaligned AI are not small. In fact, without an effective safety program, this is the only possible outcome. We are facing an almost guaranteed event with the potential to cause an existential catastrophe. This is not a low-risk high reward scenario; it is a high-risk negative reward situation. No wonder that so many people consider this to be the most important problem ever to face humanity. And the uncomfortable reality is that no version of human control over AI is achievable.

Firstly, safe explicit control of AI is impossible. To prove this, I take inspiration from Gödel’s self-referential proof of incompleteness theorem [15] and from a family of paradoxes known as Liar paradoxes, best known by the famous example, “This sentence is false”. Let’s call this The Paradox of Explicitly Controlled AI:

In reality, the chances of creating misaligned AI are not small. In fact, without an effective safety program, this is the only possible outcome.

In the first place, in the situation described above the AI is not obeying an explicit order. A paradoxical order such as “disobey” is just one example from a whole family of self-referential and self-contradictory orders. Similar paradoxes have been previously described as the Genie Paradox and the Servant Paradox. What they all have in common is that by following an order the system is forced to disobey an order. This is different from an order which can’t be fulfilled such as “draw a four-sided triangle”. Such paradoxical orders illustrate that full safe explicit control over AI is impossible.

Delegated control likewise provides no control at all and is also a safety nightmare. This is best demonstrated by analyzing Yudkowsky’s proposal that the initial dynamics of AI should implement “our wish if we knew more, thought faster, were more the people we wished we were, had grown up farther together” [16]. The proposal sounds like a gradual and natural growth of humanity towards more knowledgeable, more intelligent and more unified species, under the careful guidance of superintelligence. In reality, it is a proposal to replace humanity by some other group of agents, which might be smarter, more knowledgeable, or even better looking. But one thing is for sure, they would not be us.

Implicit control and aligned control are merely intermediary positions, balancing the two extremes of explicit and delegated control. They make a trade-off between control and safety, but guarantee neither. Every option they give us represents either loss of safety or a loss of control: As the capability of AI increases, its capacity to make us safe increases but so does its autonomy. In turn, that autonomy reduces our safety by presenting the risk of unfriendly AI. At best, we can achieve some sort of equilibrium as depicted in the diagram below: 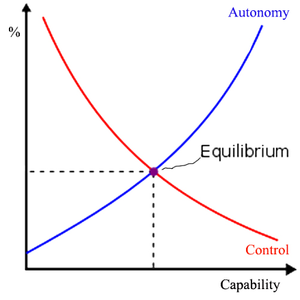 Figure 1: Human Control and AI Autonomy curves as Capabilities of the system increase.

Although it might not provide much comfort against the real risk of uncontrollable, malevolent AI, this equilibrium is our best chance to protect our species. When living beside AI, humanity can either be protected or respected, but not both.

It's great to see this here, and we appreciate you sharing it with us. Check it out and take in the details.

Thanks for discuss Artificial Intelligence. I read your excellent post. After reading this post, i really appreciate your effort and my request is to please share us more post in future. Keep it up. It is one of the best information which you are providing. The top Mobile App Dubai provides good service of mobile app you visit here site https://www.adwebstudio.com/mobile-app-developers-dubai

I was very encouraged to find this site. The reason being that this is such an informative post. Thanks for sharing!
bathrooms makeovers

Looking for the freshest speedypaper.com review? Find out the newest feedback on using the popular academic writing service shared by other students.
https://speedypaper.com/reviews

The most important quote in this article, and in general the main thing to know about AI, is that neither human control nor cession of power provides control and security. Now, this topic is of interest to many students, and in the blog https://dissertationteam.com/blog/ I try to thoroughly highlight all the issues. AI should be taken seriously, this is not a topic that can be left to chance.

I agree, I find this project pretty good
https://wordcounter.tools

Not only artificial intelligence but I think everything, in this era, is a risky investment. Whether you start a business or you start running a café. Whether you are a student who takes online help, or you are one of the https://dissertationwritinghelp.uk/qualitative-data-dissertation/ qualitative research dissertation writers, I believe that all investments require risk and that is what our lives are actually about!!

This is a wonderful post, Given so much information in it, These type of post keeps the user's interest in the website, and keep on sharing more. Thank you for this brief explanation and very nice information. hope to see you again.
https://www.hi-teche.com/category/hosting-review

When you are talking about autonomy it helps to bring in the arts as well as the sciences. The philosopher Immanuel Kant had the deep insight that human autonomy and morality are intrinsically connected. No matter what computers can do, we can't hold them responsible. Only humans make the agreement to be part of a moral or other kind of normative system, and thus become responsible. In the Biblical story of the garden of Eden, the first humans have to disobey God in order to learn the moral rules. Morality entails both responsibility and free will. Hence the importance of human supervision over AI. Morality can't simply be about obeying rules, it's also equally about interacting with peers. We learn empathy and respect for others by interacting with our peers. We also learn that rules are based on agreement, so they can be changed by agreement, but not by personal whim or dictate, or it's not morality - it's dominance.