The power of apocalypse

Our way out of the climate crisis

The melting of the glaciers, torrential rain and floods, extreme heat waves and uncontrollable wildfires, the mass extinction of animals: these are scenes of Biblical proportions. No wonder then that people repeatably reach out to the apocalypse as a metaphor for what is taking place. But the secularised version of end of the world scenarios seems to miss what is most important to the Christian apocalypse: the revelation of a deep truth. If the extreme natural phenomena we are observing are telling us anything it isn’t that the world is ending – it’s that we’ve been relating to nature in the wrong way for too long. Instead of thinking up new technological and scientific solutions to the problems our technological and scientific approach to nature have produced, we should approach nature in different ways, through poetry and religion, writes John Milbank.

To many it seems as if we are now approaching the real ‘apocalypse’ when at last nature will truly erupt with fury, the seas turn to blood and the stars fall upon our heads, as foretold by St John the Divine. This eventuality is regarded as a secular phenomenon to which we require a secular and scientific solution. But if it is precisely our secular, scientific, utilitarian and market-oriented way of life, commodifying and calculating the whole of life that has brought us to the bink of disaster, do we really need just more of the same? 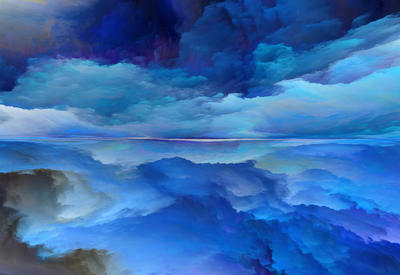 SUGGESTED READING The power of utopia By Mathias Thaler The secular apocalypse can be more accurately diagnosed as a religious one, as a kind of transcendental disclosure of ignored and buried truth. Nature is not telling us to control her more effectively at an alien distance, according to her own blueprint for survival, but to rediscover our unity with her in terms of a shared expressive creativity. We will only save the planet when we recover the sense that if we belong to nature, then nature also belongs to the realm of the spiritual.

Apocalypse: then and today

Apocalypse in the Bible didn’t simply mean the end of the world. Primarily it meant revelation: a disclosure of inner divine secrets. It also indicated a future event when such a disclosure would take place, and only to a lesser extent did it signify various attendant convulsions, including many of a violent kind, as a prelude to the eschaton of cosmic peace. In its secularized version, the concept of apocalypse was taken over by political radicals, hoping for an accelerated end of everything that is wrong with the world. If there is no God to help us, then it is up to us to purge away with force all that we find to be unacceptable. Today, however, a third stage of apocalyptic history has arrived. If secular revolutions and reforms were perhaps humanist echoes of religious illusion, then now, at last, apocalypse seems to be a matter of fact. For it is nature that is speaking to us directly, though only in the tone of threat, not of promise.

A third stage of apocalyptic history has arrived. If secular revolutions and reforms were perhaps humanist echoes of religious illusion, then now, at last, apocalypse seems to be a matter of fact.

Moreover, an apocalyptic atmosphere is not merely an occasional intruder upon the western historical scene. It is rather a continuous part of its very fabric, because even gradual reformers have been imbued with the idea of a ‘new beginning’ based both upon the notion of revelation in the Bible and the idea of a breakthrough to a fully rational and therefore divine perspective that derives from Socrates in Greece. In today’s context of environmental catastrophe, it is, however, unconvincing to suggest that contemporary predictions of doom are dubious secular versions of grim prophecies of the past that went unfulfilled. For to a degree catastrophe is already upon us, and although we cannot know to what degree human beings will adjust to its increasing incidence, it is unlikely that we will avoid widescale death, suffering and displacement.

Instead, we are forced to confront a certain reversal of our inherited apocalyptic culture. As Ralph Waldo Emerson argued in the Nineteenth Century, post-axial religion, philosophy and science have all to a degree disdained nature and matter, seeking to purify it, if not to desert it in favour of pure spirit. Human liberation and the domination of all other creatures have become inseparable. But now we are discovering that this liberation betokens no ultimate disclosure or emancipation, and that the supposedly collateral damage to nature in fact renders our own lives unlivable.

An apocalyptic atmosphere is not merely an occasional intruder upon the western historical scene. It is rather a continuous part of its very fabric.

As Emerson argued, in the wake of Wordsworth and others, this discovery should amount in itself a new mode of religious disclosure: an intensified awareness of the Creation such that we belatedly see that the fate of Spirit and of Nature are bound up with each other and that ‘the ruin or blank’ which we now see in the latter, is in fact ‘in our own eye’, while ‘the problem of restoring to the world original and eternal beauty is solved by the redemption of the soul’. Read in this new light, we can see that the Bible itself (as with Shakespeare) tended to link inner psychological crisis with natural disturbance and disaster. Conversely, John’s Apocalypse ends with a vision of the harmony between a celestial city of humans and angels and the restored fruitfulness of the earth.

Christ’s resistance, as the divine man, suffering on behalf of love and justice, against the powers of worldly tyranny as described in the Apocalypse of St John, the final book of the Christian Bible, can now be seen to be also one against our mistreatment of the natural world, as indeed many Christian saints anticipated.  The ‘apocalyptic’ vision of the New Testament indeed appears to view the entirety of human legal and economic arrangements with scepticism, as tending in the end more towards damage than to the instilling of genuine order. The rule of love is seen as being in a mounting conflict with the way of domination, that tends to bring upon itself its own punishment, including the terrible dissolution of cosmic and physical harmony.

The apocalypse as nature’s revelation

Most of our current ‘environmentalism’ simply tries to revise the usual story of technological deliverance. Instead of relying on fossil fuels, we should switch to supposedly clean and renewable energy sources; there is little suggestion that we might drastically reduce our energy consumption altogether.

In the face of such a revised and ‘Romantic’ reading of our Western tradition, we surely ought to revise also our apocalyptic legacy. We should doubt whether an ascetic despising of matter, the body and natural beauty is likely to bring us religious salvation. But we should also doubt whether an unlimited attempt to escape from natural finite limits, as with the transhumanist and accelerationist projects, is likely to bring us secular joy and contentment.

Yet there are few strong signs of such doubt. Most of our current ‘environmentalism’ simply tries to revise the usual story of technological deliverance. Instead of relying on fossil fuels, we should switch to supposedly clean and renewable energy sources; there is little suggestion that we might drastically reduce our energy consumption altogether. The switch is supposed to render us ‘carbon neutral’ and so to limit global warming, as if that were the sole dimension to our depredations of the planet. Although the proposed change is  drastic, ‘business as usual’ still prevails.

The human attempt to relate to other creatures primarily in terms of analytic understanding and pragmatic purpose eventually proves catastrophic. The pursuit of only what works turns out not to work at all.

What is more, the enforcement of ecological goals reduced to technical norms and standards is likely to increase the powers of state and corporate surveillance, besides encouraging a further disfigurement of the countryside. The machinic control of humans over humans will be added to that of humans over things, despite the fact that it is precisely the substitution of the machine for local self-reliance and personal inter-dependence that lies at the root of our ecological disorder.

All this is to ignore what has already been disclosed to us by nature. Namely that the human attempt to relate to other creatures primarily in terms of analytic understanding and pragmatic purpose eventually proves catastrophic. The pursuit of only what works turns out not to work at all.

Historical evidence suggests that fear is actually a bad motivator: it inhibits our judgement and tends to instil hatred and division, if it does not encourage an escapist paralysis.

Perhaps then, as Emerson suggested and the final book of the Bible implies, we will discover that what we can apocalyptically restore is the intimate resonance of nature with spirit: our ability to decipher ourselves through contemplating our surroundings and to bring them to greater perfection through the joint processes of cultivation and art, of ‘gardening’ and of ‘poetry’.

Otherwise, we will remain stuck in an undecidable technical calculus: just how far should we panic, what should we disallow and when, and what degree of ecological protest is justified? There is no way rationally to agree and so inevitably we will squabble, while the planet further disintegrates. We will also continuously debate as to how much to devote ourselves to rescue and how far to adaptation. And how far hope is to be regarded as an obstacle to a needed cultivation of fear, as Greta Thunberg suggests.

Historical evidence suggests that fear is actually a bad motivator: it inhibits our judgement and tends to instil hatred and division, if it does not encourage an escapist paralysis. This is not to say that we should be falsely optimistic. But it is to say, after Emerson, that we should try to recover a truly Biblical or kindred faith that we live in a Created order in which nature expresses spirit and that we therefore have a secret share in her formation, while conversely nature becomes self-aware in human beings as conscious spiritual creatures.

If we are part of nature, then why should nature be thought alien to feeling, intuition and imagination? If she is not so bifurcated, then should we not relate to her more primarily in terms of religion and poetry than of science and technology? May not our obsession with detached experiment disguise the more powerful and meaningful possibility of a miraculous synergy, as Emerson suggested? Only by being open to this possibility can we become agents of a genuine apocalyptic, a disclosure of nature’s true character, rather than victims, along with the planet, of apocalyptic delusion.