Beckett challenges us to open our eyes to the mess

Beckett’s work has become increasingly topical. Over the past six months, comparisons between the British government’s Brexit negotiations and Endgame have cropped up regularly in the press, and Waiting for Godot has been staged at the Irish border between the counties of Cavan and Fermanagh. Prior to that, Beckett’s canonical plays on stasis, inaction and circularity were regularly evoked in accounts of the Syrian Civil War and articles describing the endless plight of Syrian refugees. And prior to that, the idea that ‘this’ – any international crisis or difficult episode in European or American politics – ‘is like Waiting for Godot’ provided many journalists with some convenient one-liners. Everyone is waiting, nothing happens, and no one knows what to do: who else but Beckett can help us think about that?

The great paradox is that, on the surface, there seems to be little about Beckett’s work that might enable us to think about politics. His texts deal with uncertainty, displacement and postponement – ideas that are not easily compatible with other types of writing that openly define themselves as political. He has long been thought of as someone who had a deeply abstract way of thinking and was only interested in pure philosophical problems, rather than the problems of the world in which he lived. However, to many among his acquaintances, he came across rather differently: as someone who had an instinctive and deep understanding of pain and suffering, and as someone who knew that times of genuine political tension also bring to light many otherwise hidden truths. He was deeply interested in those moments when what appears to be the set course of history is overturned, and witnessed many such moments over the course of his lifetime.

To some, the situations represented in his work – in his plays in particular – can seem divorced from any recognisable reality. To others, however, the situations of torture, dispossession and subjugation that Beckett’s work depicts are intimately familiar, and its insights into the importance of memory, courage and solidarity are unrivalled. When war and conflict edge closer, Beckett’s writing becomes strangely real and visceral. Many across the world have seen, and continue to see, deep and immediate political resonances in a body of work revolving around ruins, ashes, mud and stones, around waiting and suffering, and around terror, devastation, internment and forced exile.

The political knowledge that the work carries is a political knowledge that Beckett acquired in the hard way, through experience and observation. The wars and severe political convulsions that made modern Europe shaped his worldview, and he had an unusually extended knowledge of what war does to nations and to peoples. The key themes in his writing – violence, exploitation, dispossession – are politically profound, yet the writing itself doesn’t conform with what is normally expected of openly politicised literature. We can’t expect to find directly identifiable, unambiguous representations of real events in Beckett. What we get are evocations, layers, suggestions, echoes, cultural ciphers, lone allusions. It is clear from the manner in which he wrote that he sought inspiration in the world he knew, and that the political tensions and tragedies that he witnessed were often what inspired him to write in the first place; yet, at the same time, he actively wrote all of this out, and avoided describing specific events directly.

His experience of political history was unusually extensive and unusually direct. He witnessed the impact of the Irish Civil War and the Irish War of Independence in his childhood and early youth, and gained first-hand exposure to Nazi Germany’s belligerent rhetoric in adulthood. During the Second World War, he experienced Nazi occupation in wartime France and contributed to the war effort and to the work of resistance networks, translating military information for a French resistance cell under the command of the British SOE. There were other Irish nationals working for French resistance cells, but he is the only Irish writer to have fought so directly in an anti-Nazi resistance movement. The resistance cell was wiped out following a denunciation; Beckett escaped but other members of the group – over a hundred of them – were caught and shot or deported to the Nazi camps. He remained haunted by what had happened around him. He never bragged about what he had achieved, however. When he was asked why he had joined the French Resistance, he simply said that he ‘couldn’t stand [by] with [his] arms folded’. For the rest of his life, he followed the same principle: he observed what was taking place around him and took action when he could, without drawing attention to himself or seeking to claim credit for his actions. Wars followed one another; in the late 1950s and early 1960s, he followed the political debates ignited by the Algerian War of Independence attentively, registering some of these tensions in his texts from the period, and he supported his French editor, who was a close collaborator and friend, through hard times, through censorship and through struggles with the courts.

"His work encourages us to look at what is in front of us – to, as he put it, ‘open our eyes and see the mess’"

He counted among his collaborators and friends many artists and figures who were strongly politicised and left-leaning, and who sometimes paid a high price for their political activities. For his part, he gave steadfast support to campaigns for justice and freedom of speech and movement, and began to sign petitions when he decided to become a professional writer in the early 1930s; that same decade, he became one of the translators involved in a large anthology of Black writing. Over his lifetime, he signed a vast number of petitions to defend the rights of figures as varied as the Scottsboro Boys, Salman Rushdie or Soviet political prisoners such as Mikhail Stern, Anatoly Sharansky and Semyon Gluzman. He wasn’t politicised in the usual ways – he wasn’t a member of a political party, for example – but he sustained different kinds of political commitments, and looked upon political figures such as François Mitterrand and Václav Havel with interest and admiration. He signed petitions against human rights violations beyond the Iron Curtain, in Chile under Pinochet and elsewhere across the world. He made regular donations – among them, a manuscript for auction to the ANC, rare editions of his works to Oxfam and Amnesty International, and money to help cover judicial support for four members of the Black Panther Party –George Brown, Jean and Melvin McNair, and Joyce Tillerson – who were detained in France after hijacking a plane. He joined artists’ groups associated with the British and Irish anti-apartheid movements and with the defence of civil liberties. He contributed a poem to a volume conceived as a tribute to Nelson Mandela. And much more. He was someone to whom people turned when they were in difficulty; someone who helped others.

Beckett’s political legacy is much more extensive than we might think. For many among his contemporaries who aspired to see change, not simply in art, but in world politics, his writing held strong historical significance. Radical political theorists such as Ernst Bloch, Theodor Adorno and Herbert Marcuse, politically transformative playwrights such as Lorraine Hansberry, Adrienne Kennedy and Amiri Baraka, and theatre companies such as the Free Southern Theater, tied to the American civil rights movement, displayed a deep interest in his work. The places in which his plays have been performed tell us of the deep political realisations that many have seen in his writing. In the 1960s, Waiting for Godot was performed across the black American South alongside Ossie Davis’s Purlie Victorious, a satire of segregation and a tale of revolt and emancipation that became a crucial cultural landmark for African Americans. In 1993, it was performed in Sarajevo under siege, in an adaptation directed by Susan Sontag, and in 2007, on the devastated streets of New Orleans after Hurricane Katrina, in a production directed by Paul Chan. In 2011, the Freedom Theatre’s Acting School in the Jenin Refugee Camp staged an adaptation of the play as a tribute to their mentor, Juliano Mer Khamis, after his assassination, transforming Waiting for Godot into a reflection on what waiting means for Palestinians. Other artists – notably the American playwright Antoinette Nwandu – have sought inspiration in Beckett’s writing to reflect on waiting as a fundamentally dangerous and life-threatening activity for African Americans.

Beckett was well aware of the power that his words have for those who are waiting – for a better life, for peace, for justice. When the Swedish theatre director Jan Jönson showed him photographs of the black inmates rehearsing Waiting for Godot at San Quentin prison, he responded by saying that he could see in these photographs ‘the roots of [his] play’. His work encourages us to look at what is in front of us – to, as he put it, ‘open our eyes and see the mess’. Opening our eyes: that may well be the most difficult political gesture of all. 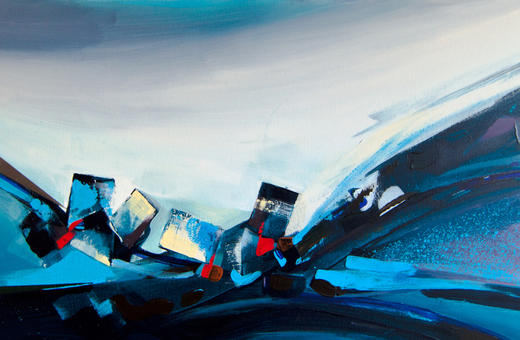