There is no escape from the necessity of realism

| Professor of Logic at the University of Oxford and world renowned philosopher of language and logic
1,646 words
Read time: approx. 8 mins

In his recent article, Hilary Lawson argued that realism fell into paradox and that post-realism could retain both empiricism and rationalism, making it the future of philosophy. But not only are those paradoxes surmountable, logic itself demands realism - an inconvenient fact which makes Lawson’s post-truth project impossible - argues Timothy Williamson.

Hilary Lawson’s article ‘Post-realism’ could equally well have been entitled ‘Post-truth’, since it is truth that he is declaring obsolete. Since he is responding to my piece In defence of realism, I will explain where his objections go wrong. 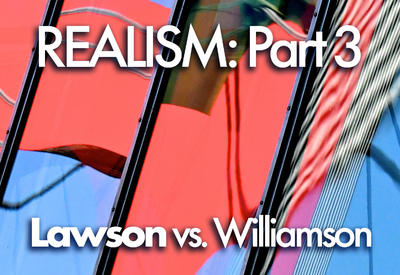 SUGGESTED READING Post-realism By HilaryLawson Lawson points out that appeals to truth will not defeat dictators and demagogues, whose supporters are convinced that they already have the truth. But the question is not whether the distinction between truth and falsity is sufficient for blocking tyranny—of course it isn’t—but whether it is necessary for doing so. A resistance which cannot call out the tyrant’s lies as false is in bad shape. Without truth, there is no falsity either, for a false statement is just one whose denial is true. Conversely, a true statement is one whose denial is false. Truth and falsity come as a package. In telling us to give up the category of truth, Lawson is by implication telling us to give up the category of falsity too. Do we really want to live in a world of post-falsity politics?

According to Lawson, however as much we might want the distinction between truth and falsity, we cannot have it, because it has been exploded by paradoxes of self-reference. For example, let ‘L’ label the sentence ‘L is not true’. Ask yourself whether L is true. If it is, it isn’t, and if it isn’t, it is, by standard patterns of reasoning.

Unfortunately, Lawson gives a highly misleading picture of modern research on the paradoxes, which he presents as merely a series of failed attempts to solve them. He does not specify what he means by ‘solve’ in this context. A basic standard is to specify clear rules for reasoning with the terms ‘true’ and ‘false’ which lead to no contradiction when applied to sentences like L. Many available treatments of the paradoxes meet that standard, including those of Alfred Tarski and Saul Kripke, mentioned in my earlier piece as recognized leaders in the field. To dismiss their achievements is a serious injustice, though perhaps post-realism dumps the distinction between justice and injustice along with the distinction between truth and falsity.

Current research on the paradoxes, such as that of my Oxford colleague Volker Halbach, builds on the work of Tarski, Kripke, and others in order to go further and deeper. Just as in natural science, it is not a matter of scrapping what one’s predecessors did and going back to the drawing board. Unlike Lawson, logicians who study the paradoxes do not take them to show that there is no truth. More reasonably, they treat them as showing that reasoning about truth is not as simple as it first seemed.

For several reasons, what has been done so far on the paradoxes is not the last word. Typically, treatments of the paradoxes restrict the principles of reasoning used to derive contradictions, in order to block the derivations. Sometimes, the restrictions turn out to be unnecessarily severe: one can loosen them a bit and still avoid contradiction. Avoiding unnecessary restrictions is one kind of progress. Another kind of progress consists in finding a deeper or broader rationale for the remaining restrictions—some must remain, otherwise the original contradiction recurs. Lawson claims that ‘these attempts to overcome self-referential paradoxes rely on arbitrarily outlawing such self-reference’, but the complaint rests on a misunderstanding: most contemporary accounts permit self-reference, and simply limit some principles about truth to not apply in some cases (though far from all) of self-reference—not at all arbitrarily, but to avoid specified pathologies in the application of the rules to those cases.

Treatments of the paradoxes can be compared to treatments of a disease. Doctors have painstakingly developed various treatments which prevent the disease from being fatal. Progress continues in reducing unpleasant side-effects, and in understanding the deeper causes of the disease. In effect, Lawson declares all the treatments failures, and the disease fatal.

The unwary reader might get the impression that Lawson is an expert on logic, upholding its rigorous standards. He writes: ‘Bland assurances that paradoxes of self-reference can be brushed aside are for those readers who do not engage in the detail of the logic’ and, ‘After a career making such a case, I now appreciate that an appeal to logic is unlikely to shake those with a deep attachment to realism’. If he had really spotted logical mistakes in Tarski’s and Kripke’s classic works on the paradoxes, mistakes which all the recognized experts in the field had overlooked, he could have earned himself a worldwide reputation by publishing his results in a top logic journal. That is the acid test in logic: to pass examination by referees, specialists on the topic of the paper, scrutinizing it line-by-line. That the paper alleged mistakes in previously accepted work would have been no problem: recognized logic journals publish such error-spotting articles.

As far as I can discover, Lawson has never published an article in a recognized logic journal—if he had, ‘Post-realism’ would have been an ideal place to advertise it. His book Closure is no substitute, since there is no reason to expect it to have been scrutinized by a qualified logician. Lawson’s position is analogous to that of the non-physicist explaining that Einstein got it all wrong.

Lawson over-hypes the role of the paradoxes of self-reference in the history of twentieth-century philosophy. According to him, ‘They confounded Russell in his attempt to provide an account of mathematics’. But Russell’s paradox, which made so much trouble for him and others working on the foundations of mathematics, was about self-membership for classes, not self-reference. Membership and reference are quite different relations. To be a member of the class of pebbles is just to be a pebble; to refer to the class of pebbles is to stand in a linguistic or mental relation to pebbles. Anyway, Russell’s paradox did not ‘confound’ his account of mathematics; he found a way to avoid the paradox, but others, such as the German mathematician Ernst Zermelo, found more elegant and fruitful alternatives.

Lawson also claims that the paradoxes of self-reference led the later Wittgenstein ‘to conclude that any account of the relationship between language and the world must fail’, adding ‘It is not a conclusion that has been effectively countered’. Whether or not his interpretation of Wittgenstein is correct, the conclusion has been effectively countered by a rich tradition in the philosophy of language over the past sixty years, which characterizes the meaning of declarative sentences in terms of their truth-conditions and the meaning of many words in terms of the objects in the world to which they refer. Work by Tarski and Kripke has again been central to that tradition. One sign that it is driven by explanatory power, not by philosophical dogma, is that it has been immensely influential outside philosophy, on semantics as a branch of linguistics: one can point to the seminal work of Barbara Hall Partee and Angelika Kratzer, to pick a couple of names.

Even Lawson’s description of the problem as ‘paradoxes of self-reference’ may be a misdiagnosis. In 1993, Stephen Yablo published a paradox of truth which seems to involve no self-reference, direct or indirect. Instead, it has an infinite sequence of sentences, each saying that none of its successors is true. The problem is not so much self-reference as ungroundedness, where the buck of truth gets passed forever, either round and round in a circle or along an infinite chain.

Lawson wants logic without truth. In rejecting truth, he takes himself to be relying on logically valid arguments. But the standard account of logical validity is in terms of truth: for an argument to be logically valid is for the truth of its premises to require the truth of its conclusion (exactly what ‘requires’ means here can be spelt out in different ways, which we needn’t go into). Without truth, there is no logical validity in the standard sense. Of course, Lawson might try to understand logical validity in truth-independent terms. Others have attempted to do so, though with little success. Lawson seems not to recognize that his project of keeping logic while dumping truth faces this massive challenge—like keeping the molecules while dumping the atoms they are made of.

Similar problems arise for Lawson’s assumption that after he has dumped truth he can still have ‘learning’ and ‘rigorous rational and empirical principles’. Rigour gets its significance from an attempt to exclude various kinds of error. But, for Lawson, there are no errors. For error involves falsity, and for Lawson there is no falsity, since there is no truth. By his post-realism, we cannot learn from our errors, because we never make any. If only!