What Is The Meaning of Life?

Being 'awake' makes life full, and those going through transformative experiences know this

According to scientific materialism, we human beings are just chemical machines (“throwaway survival machines,” to quote the arch-materialist Richard Dawkins) whose only purpose is to survive and reproduce, so that our genes can continue. Otherwise there isn’t really much of consequence in our lives. We may attempt to create other kinds of meaning – for example, by following a religion, trying to become rich or famous, or trying to make the world a better place – but all we’re really doing is following our genetic and neurological programming. Even our consciousness – the feeling of having experience inside our own heads – may not really exist, or is just a kind of shadow of our brain activity.

However, I take the rather unfashionable view that there is meaning to life. I don’t think we are just ghost-like entities living inside our machine-like bodies with an indifferent machine-like world out there, in cold separation on the other side of our heads. That human life is just a meaningless space between birth and death, for us to spend trying to enjoy ourselves and forgetting the futility of everything. I think that human life and the world mean much more than that. (I’m not religious either. I consider myself an atheist.)

My perspective is informed by the research I have done over the past ten years as a psychologist, on people who have undergone what I call ‘suffering-induced transformational experiences’ (or SITEs, for short). These are people who were diagnosed with cancer and told they only have a short time left to live, people who suffered bereavements, who became seriously disabled, who lost everything through addiction, and so on. In some cases, they had close encounters with death during combat or survived heart attacks or serious accidents.

"The sense that life is meaningless is a distorted, limited view that comes when we are slightly ‘asleep’"

What all these people have in common is that, through undergoing intense suffering, they ‘woke up.’They stopped taking life, the world and other people for granted. They gained a massive sense of appreciation for everything - a sense of the preciousness of life, their own bodies, the other people in their lives, and the beauty and wonder of nature. They felt a new sense of connection to other people, to the human race as a whole, to the natural world, and even to the universe was a whole. They became less materialistic and more altruistic. Trivial things (like material possessions, career prospects, worrying about what other people think of you) became more trivial, while important things (like love, creativity, altruism) became much more important. They felt intensely alive, and also that the world itself had become intensely alive.

Some Examples of SITEs

As one woman who had been diagnosed with cancer said several years after the cancer was in remission, “I’m just so, so fortunate to be alive on this planet . . . I just feel so privileged to be on this earth and to have been given this awareness.” A recovering alcoholic told me, “It’s very comforting and very empowering and it makes you feel very safe... It’s a knowing that you are a part of something far more wonderful, far more mysterious.”

One woman who was seriously injured – and almost died – in the 2005 terrorist attack in London said, “From the moment I was given the option of choosing life, I made a vow: that if I survived I would live a full life, a good and rich life. I vowed that I would never take anything – all that I have – for granted again. I would never forget how precious every single day is.”Another person who almost died through drowning said that he now possessed, “A great sense of appreciation for the little things — not just the spectacular beauty of a flowering tree, but the beauty of even the most insignificant objects, even inanimate objects.”One person addressed the topic of meaning specifically, describing how “My goals changed from wanting to have as much money as possible to wishing to be the best person possible, and to have as large of a helpful impact on the world as I can do. Before, I would say, I didn't really have any sense of a meaning of life. However, after, I feel the meaning of life is to learn, grow and experience.” 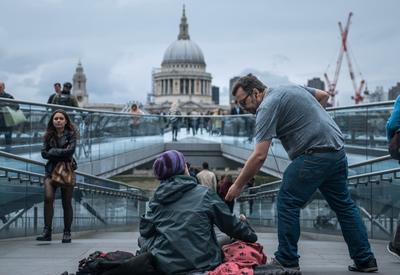 SUGGESTED READING Are You As Good As You Think? By Christian B. Miller It’s important to point that none of these people were – or became – religious. This wasn't the kind of ‘born again’ experience that some Christians talk about, although many people did feel as if they had a new kind of identity, even to the point of feeling like they were - as one person put it - a different person living in the same body. It’s also important to point out that the change wasn’t just temporary. In most cases, it was a permanent change that has remained stable over many years.

Overall, I think transformation can be described in terms of finding new meaning in life.

Experiencing Meaning in Other Situations

Fortunately, we don’t just have to go through intense suffering to experience these effects. There are also certain temporary states of being when we can also sense meaning. Usually this is when our minds are fairly quiet, and we feel at ease with ourselves - for example, when we’re walking in the countryside, swimming in the ocean, or after we’ve meditated or done yoga, or after sex. There is a sense of ‘rightness’ about things. We can look above us at the sky and sense something benevolent in it, a harmonious atmosphere. We can sense a kind of radiance filling the landscape around us, emanating from the trees and fields. We can sense it flowing between us and other people –as a radiant connectedness, a sense of warmth and love. We feel glad to be alive and feel a wide-ranging sense of appreciation and gratitude.

In other words, we find the meaning of life when we ‘wake up’ and experience life and the world more fully. In these terms, the sense that life is meaningless is a distorted, limited view that comes when we are slightly ‘asleep.’ In our highest and clearest states of being, we perceive a meaning that we sense is always there - and that somehow we previously missed. When our awareness intensifies and our senses open up, there’s a sense of returning home, back to meaning.

In one sentence, the meaning of life is life itself, and everything that constitutes life.

Who want to know the meaning of life? I find some perfect things which make my data perfect, this is only because i start to share more where you can easily be just understand those https://www.essaywritingland.com/ things which are going to be happen in your life and you have to maintain your life must.