Is war the state of nature?

Thomas Hobbes famously described the state of nature – the imagined condition of humankind before the existence of central governments – as “war of every man against every man”. This has led many political theorists to think that war is simply the human condition. This thinking has in turn influenced theorists of international relations, who see contemporary states resembling the individuals of Hobbes’ state of nature – coexisting in an environment with no overriding authority, and no way to resolve conflicts other than through violence. But such accounts both misunderstand Hobbes’ state of nature, and exaggerate the similarities between individuals and states, argues Silviya Lechner.

In Leviathan, Thomas Hobbes described the state of nature as a condition of ‘warre . . . of every man against every man’, a vivid description that has inspired generations of political theorists and students of international relations, especially those sympathetic to the theory of political realism. But the ambiguity of the concept of ‘war’ and how Hobbes understood it remains. Is war among nations – or states – the same, similar, or radically different from war among human individuals? Is the international realm an arena where states are constantly in a state of war, competing for power and security, as realism would have it? And if so, what kind of arrangement, if any, would put an end to this condition? 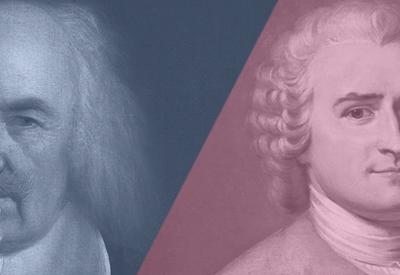 SUGGESTED READING Hobbes vs Rousseau: are we inherently evil? By Robin Douglass Hobbes often talks as if the state of nature is a state of war, but actually the two concepts are different. My thesis is that the general concept of a state of nature represents an unregulated domain of free interaction, whereas the state of war (‘war’ for short) is a special case of it denoting a condition of uncertainty and mutual hostility.

Hobbes and the state of nature

How much evidence can we find in Hobbes’s writings to support the realist case that the international realm is a domain of war among nations? ‘[] The nature of War, consiteth not in actual fighting, but in the known disposition thereto’, he writes. In this sense, it is a state of mutual hostility. But is it necessary to assume, in addition to the premise of mutual hostility, that states are at war, competing for power and security? Is the notion of an international anarchy – a condition of state interaction not regulated by an overarching public authority in the global realm – rendered complete by the idea of ‘war’, in Hobbes’s terms, or does it require also the premises of power and security?

To answer this puzzle, it is necessary to retrace the argument back to Hobbes’s general account of a state of nature. A distinctive feature of this account is that it emphasises the notion of interaction between agents. Hobbes does not posit a situation where I act alone, facing a difficult situation that demands a response on my part (crossing a dangerous river, say), but one where I find myself surrounded by others – and the fact of being surrounded by a ‘multitude’ is the starting premise for the predicament associated with the state of nature.

Hobbes has entitled Chapter XIII of Leviathan ‘Of the NATURALL CONDITION of Mankind concerning their Felicity, and Misery’. The title is apposite since the predicament characteristic of Hobbes’s state of nature is infelicity or frustration. Hobbes had already articulated a view of felicity at the beginning of Chapter XI as a ‘continuall progresse of the desire, from one object to another; the attaining of the former, being still but the way to the latter. The cause whereof is, That the object of man’s desire, is not to enjoy once onely, and for one instant of time; but to assure for ever, the way of his future desire’. To procure felicity one needs power construed as one’s ‘present means, to obtain some future apparent Good’.

Hobbes, then, does not understand power in the narrow sense of military power, as realism does, but very generally, as a universal means of goal satisfaction.

It is noteworthy that Hobbes no longer links felicity to power in Chapter XIII of Leviathan. There, infelicity is said to arise not because the individual lacks power, but because obtaining the object of one’s desires, whatever it might be, is obstructed by the mere presence of others.

The state of war, even though its acerbic imagery is certain to arrest our attention, is just a special case of Hobbes’s state of nature.

Whenever a human being is not acting alone, but acts amidst a ‘multitude’ – in the absence of a general framework of common rules – issues would arise such as the impossibility of enjoying an object that cannot be simultaneously shared with another. This account of the state of nature may be called structuralist since it does not depend on what the agents intend (their motives) or want (their goals) but only on the structure of interaction – the fact that they cannot avoid interacting with one another in an enclosed finite space (such as the Earth).

Hobbes provides a parallel, motivational account of the state of nature. It is based on three conflict-generating passions that push individuals into action: ‘competition’ (covetousness), ‘diffidence’ (mistrust), and ‘glory’. The latter is defined as defined as ‘joy arising from imagination of a man’s own power and ability’. The most interesting passion for the present purposes is diffidence since it is  the one that fuels the state of war. (Neither glory, or indulging in imaginary visions of one’s greatness, nor covetousness, the pursuit the accumulation of goods by the solitary agent, necessarily prompts conflict among multiple individuals).

At this juncture, Hobbes’s argument dovetails because two parallel stories can be told about the passion of mistrust. The realist story is that, given fear of death – as a fundamental postulate of Hobbes’s moral theory  – mistrustful individuals who encounter each other for the first time might resort to anticipation or pre-emptive strikes. This is because in the absence of certainty about the intentions of others, it is warranted to assume  a worst case scenario - that the second party might attempt to kill me -  thus pre-empting the attack by striking first seems a rational strategy (Kavka 1983).

The second story about mistrust concerns time-asymmetric contracts termed ‘covenants. In such contracts the second party performs after the first party has already performed.  In the state of nature, where no public coercive authority yet exists, there is no assurance that the second performer, Barbara, will keep her word.  Covenants therefore are marked by fundamental epistemic uncertainty about states of affairs obtaining in the future (and future fulfilment of time-asymmetric two-party transactions) but this type of uncertainty does not entail the conclusion of mutual hostility.

Hobbes seems to invoke the absence of a global public authority to regulate the relations of states as a factor which explains the state of war.

The realist reading of Hobbesian war:

What, then, of the realist’s reading of the famous passage in Chapter XIII pointing to war among nations?

"Yet in all times, Kings, and Persons of Soveraigne Authority, because of their Independency, are in continuall jealousies, and in the state and posture of Gladiators; having their weapons pointing, and their eyes fixed on one another; that is, their Forts, Garrisons, and Guns upon the Frontiers of their Kingdomes; and continuall Spyes upon their neighbours; which is a posture of War. "

Hobbes seems to invoke the absence of a global public authority to regulate the relations of states as a factor which explains the state of war, as a state of uncertainty that is necessarily hostile in its effects. But this is only tenable if we assume the possibility that a state may be easily killed by another state (i.e., fear of death).

In a famous article, ‘Hobbes and the International Anarchy’ (1981), Hedley Bull defended the disanalogy between the international anarchy (a state of nature among states) and the domestic anarchy (a state of nature among human beings). He argued that states represent principally different agents when compared to human individuals. Human individuals are usually dependent on others, but states, especially great powers, are relatively self-sufficient. Moreover, states are hard to kill since an international war would rarely cripple the target state (its organisational and military resource base) completely. And while it is possible to revive an almost ‘dead’ state (via reconstruction), the option is not available to human individuals. Third, and following from the second point, states need not invest most of their energy into the provision of security (against other presumably hostile states) but can devote at least part of it to economic development and transborder cooperation.

If Bull’s analysis bears scrutiny, it lends support to the realist premise that states coexist in the international anarchy. Nonetheless, it does not support the orthodox realist argument which links uncertainty – or ‘war’ in Hobbes’s sense – to the pursuit of power and security. Under conditions of uncertainty, the argument goes, power becomes a means for providing security for nervous states. But, once again, this realist hypothesis only works if we introduce the further premise of hostility, a premise which requires states to be ‘mortal Gods’.

If, on the contrary, as Bull suggested, states are very hard to kill, the international anarchy constitutes a palatable condition for states. Therefore, they are not pressed to create a global sovereign the way human beings are normally said to be compelled to create a domestic sovereign (public coercive authority). Hobbes himself thought that even when an interstate war occurs – war no longer being a ‘known disposition’ but an actual conduct of hostilities among public authorities – it does not encumber the well-being of the citizens living inside state borders.

Strauss, Leo (1963) The Political Philosophy of Hobbes: Its Basis and Its Genesis. Chicago: Chicago University Press.